In this article, let us see what Black Box testing and White Box testing are and how these testing techniques vary from one another.

What is Black Box testing?

Black Box testing is a higher-level software testing method that focuses on the performance and functioning of the software. In other words, these tests are executed externally from an end-user perspective.

As a result, we can determine and evaluate the application’s security without accessing its internal structure.

What steps should you follow in Black Box Testing?

These are the steps that a tester needs to follow to carry out Black Box testing.

Elevate Your Black Box tests with AccelaTest Sign Up, It's Free

What is White Box testing?

White Box tests are carried out to check the internal functioning of an application. Hence, these tests are based on lines of code, branches of a repository, paths, or conditions. Therefore, the software tester or developer should be familiar with the internal structure.

What steps should you follow in White Box Testing?

These are the steps a software developer or tester needs to follow when carrying out White Box software testing. 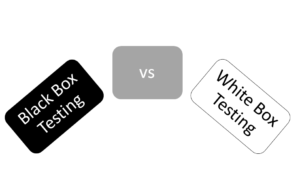 In this section, we will examine the key differences between Black Box testing vs White Box testing.

Who and how are White Box and Black Box Testing performed?

End-users and software testers carry out Blackbox testing. Fortunately, there is no need to access the code base for this testing or require programming knowledge. Therefore, the involvement of developers during this activity is not necessary.

In contrast, White Box testing is carried out mainly by software developers while collaborating with software testers. Therefore, programming knowledge is required to carry out White Box testing as accessing the code base is necessary.

What types of testing belong to White Box Testing and Black Box Testing?

Documenting your Black Box scenarios is part of the tester best practices. Through proper documentation, you can consistently deliver quality software during the development process. If you need an excellent free test case management tool, AccelaTest is your best choice for managing your software testing lifecycle.

Document Your Scenarios with AccelaTest Sign Up, It's Free

Unit Testing and Testing for Memory Leaks are necessary White Box test types. Unit Testing is the initial test carried out in the testing phase, and it tests each unit or block of code while being developed. Faults and defects captured in this level are not complicated to fix. Executing Memory Leak tests verifies whether there are any memory leaks in the application. Having memory leaks would be detrimental as they are capable of slowing the application down significantly.

Black Box tests and White Box tests are applied on the software testing levels according to their nature.

Black box testing is applicable on higher levels of testing such as System Testing and Acceptance testing.

On the other hand, White box testing or clear box testing is applicable on low-level testings such as Unit Testing and Integration testing.

Execute Your Black Box Tests in AccelaTest Sign Up, It's Free

The basis of test cases for the White Box testing method begins with completing the Detail design document. In this testing, the domain and interior boundaries of the application are tested. Test cases written for White Box testing will be less complex, and they will include the information related to technical concepts like statements, code coverage, etc.

Test case management tools can be very useful for testers regardless of White Box or Black Box testing, especially when running E2E tests.

EclEmma, HtmlUnit, NUnit, Parasoft Jtest, PyUnit, and CppUnit are popular tools we can use for White Box testing.

Are White Box and Black Box testing a time-consuming process?

Test automation is difficult for Black Box Testing. But we can easily automate White Box Testing. Automated test cases are useless when the code base is in a state of constant churn.

Black Box testing is the best for substantial code segments. With White Box testing, we can remove extra lines of code that lead to defects.

Both Black Box testing and White Box testing are required to complete the software development cycle’s software testing phase successfully. Analyzing and understanding the difference between these two test types assist us in identifying the exact test we need to carry out depending on our test requirements.

Experience the Amazing Features of AccelaTest Sign Up, It's Free
We use cookies on our website to give you the most relevant experience by remembering your preferences and repeat visits. By clicking “Accept”, you consent to the use of ALL the cookies.
Do not sell my personal information.
Cookie settingsACCEPT
Manage consent